This Guy Owns the Pizza Planet Toyota from “Toy Story”

Not even the 30th movie car we’d remember, but still damn near perfect.

This article was originally posted on The Drive, a Time Inc. publication.

It’s the 20th anniversary of Toy Story, and for some Disney acolytes, a yellow Toyota pickup truck that appears in one quick scene is the most exciting part of the entire series.

Don’t remember? After squabbling over who is Andy’s favorite toy, Buzz and Woody tumble out of the family car on their way to Pizza Planet. Stranded, they find a rusty, yellow Pizza Planet delivery truck en route, which becomes an impromptu chariot that carries the duo on to one of many adventures.

Four years ago, Marco Bongiorno was a college student working as a Disneyland photographer in Anaheim, Calif. He bought a blue 1988 Toyota pickup to create the most realistic Pizza Planet tribute truck the world had ever seen. Like many car fans, Bongiorno believes that his truck’s glory hinges on the minor details.

“We aren’t the first Pizza Planet truck out there,” he told The Drive. “But when we see others, we can’t help but nitpick about colors and things that aren’t true to the film.”

The primerless Maaco paint job marked the start of the truck’s journey. Then came the rocket sign, the identical white bed cap, intentional rust, the exact drink cup spotted in the cab—and an overheating issue. The truck was featured at the D23 Expo in Anaheim, a convention hosted by the official Disney fan club. There, the crew handed out their “YO” buttons, each clad with the truck’s iconic tailgate nomenclature.

Like the pickup itself, Bongiorno didn’t make the buttons for any reason other than he liked the idea. “Originally, it was built as a disposable spectacle,” he says of the truck. “But now we just like to inspire nostalgia. People really short circuit when they see it.”

Apparently, so does Pixar—Toy Story’s creator and, since 2006, a subsidiary of Disney. Look carefully in nearly every Pixar film since 1995, and you’ll see the animated truck pop up randomly—not just for Toy Story sequels, but even inFinding Nemo and Wall-E.

Bongiorno’s dirt-clad Toyota makes rounds at southern California car shows, where it’s frequently mistaken for a food truck. Once parked, Bongiorno tells people not to lean on the show car, but it’s not informed by the typical garage-queen logic. “We’ll get back from the event and think, we’ve gotta put more dirt on because people wiped it all off,” he says.

Bongiorno hopes to drive his truck cross-country by the time Toy Story 4premieres in 2017, although he needs a new carburetor, muffler, hoses and must “weld the catalytic converter back into place,” according to his GoFundMe page. (To date, the old yellow pickup hasn’t smitten anyone to donate.)

But to answer the obvious, most important question: “We still haven’t delivered a pizza yet.” 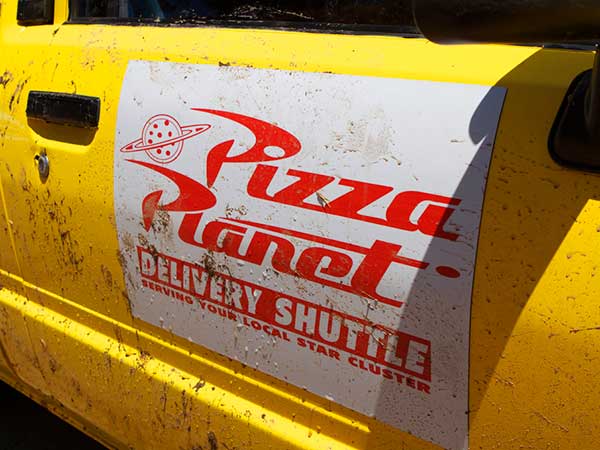