A Letter to 16-Year Olds with Junk Cars

This is an updated version of one of my favorite pieces. I originally wrote it a while back and recently stumbled upon it. I’ve only made a few changes to it. Enjoy!

It’s about time you gave your junk car a break. Trust me, it’s much more important than you think it is. I used to be like you. I used to wallow in the woeful, rusty nature of my first car. But as I sit here in the living room of my mansion sporting a velvet robe and pipe, I realize that I’ve made it, and it’s all because of my old rust bucket.

I realized this after I was interrupted by a sweet concerto coming out of my girlfriend Anna Kendrick’s iPod as she showered and sang along to the music in our palatial bathroom. I can’t help but let my mind wander about the meaning of a relationship, not only between people, but also between cars and their owners.

Okay, while I’m actually sitting in my girlfriend’s apartment not sporting such a desirable outfit, this argument does nonetheless cross my mind. As Fountains of Wayne’s middle-school era hit “Stacy’s Mom” blares through the bathroom door, I can’t help but think about the dynamics of relationships. While it takes confidence to knowingly sing aloud to such a laughable song in front of your significant other, it also takes confidence to do lots of things. I notice that those who drive less desirable cars tend to lack confidence in their vehicles and commonly refer to them as a “piece of crap” or other, more creative names. But there is something about it that just feels wrong, as these non-Ferraris and less-than-Lexuses should not be a source of shame, but rather a badge of honor.

Whether you drive a 1988 Ford Escort with paint that hasn’t seen clear coat since “Ice Ice Baby” was a hit, or a brand new Aston Martin DBS, there should be love in that car-owner relationship. Plainly, your car does not have to be nice for you to love it. In fact, there is a bit of a reward for loving such a troll of a vehicle. Take the Dodge Monaco rust bucket that the Blues Brothers drove around for example.  It had cigarettes rolling around on the cracked dash and had paint that mimicked the shiny veneer of a school chalkboard. In other words, it was a piece of junk. But as many know, following arguably one of the best car chase scenes of all time, the mammoth falls to pieces and Dan Aykroid is visibly saddened and accordingly removes his hat in mourning. Here lies my argument. A relationship, whether you realize it or not, is severed when you trade in your rusted Ford Escort for something newer. It then hits you that all those years of cracked leather, dead battery jumps, and broken climate knobs created a relationship which has now been broken thanks to your personal gluttony for modern convenience and comfort. Shame on you.

So what if you pull up to your first date and not every body panel is of a matching color? Loving your hunk of junk and being proud of it exudes confidence, and while the mysterious stains on the seats or the nice smell of a burning clutch might gross out your date, you’ll definitely stand out as confident. The fact of the matter is it’s funny, and you can even make jokes about it, which will probably make you look less like a serial killer in your junker. After all, taking pride in the little things is what makes life great. Constantly looking forward to the return of Cash for Clunkers is miserable, pointless, and your date will not dig your lack of confidence and will probably start looking for other faults in your character. Eventually, she’ll eventually leave you altogether and date someone else with a name like “Blaine” who has one earring and a knack for ’90s leather jackets—but I digress. 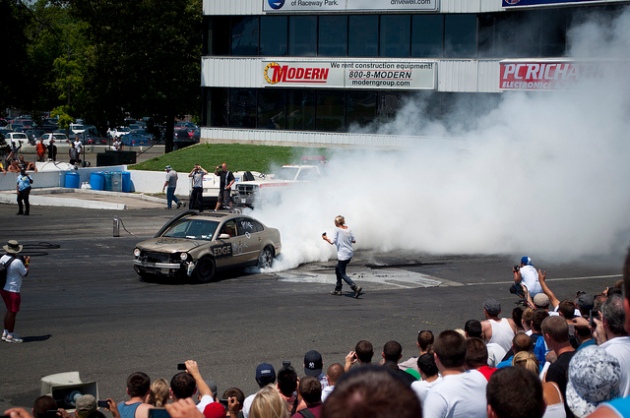 Chicks dig that confident spark. Think about it, if you were able to roll up in a new Ferrari 458, you’ll think she’s wowed over by it, and she just might be. However, you’ll be so absorbed in the experience of driving a Ferrari, that your date will probably suck and she’ll think you’re selfish and a bit of an ass because you put your cappuccino in the only cup holder. But rolling up confidently in your Chevy Beretta is funny and quirky, so show it off. Give her a tour of those automatic seat belts, those always-trendy red cloth seats, and the four-speaker audio system with the optional cassette player included (whoa, you big spender). She’ll laugh and it shows that you can care about something and it’s a great conversation piece, assuming you play your cards right.

So as I wait for my significant other to finish getting ready so we can finally leave, think about this: your rusty lemon is exactly that, yours. Love it or hate it, you’re stuck with it so make the best of the situation. Giving it a funny nickname like the “Shag-wagon,” or “The Golden Chariot” not only gives it a personality, but it will make her smile. Love your lemon because before you know it, it might just finally die on you.